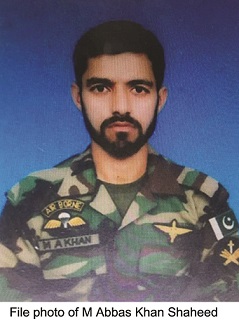 Funeral prayers of Muhammad Abbas Khan, SSG (Navy), who embraced shahadat while valiantly fighting the terrorists during counter terrorism operation at PC Gawadar, were held at Karachi and his burial rites were held at native town, Haripur.

The funeral was attended by the Governor Sindh, Mr Imran Ismail and Pakistan Navy's Senior Officers including Commander Coast, Commander Karachi, Commander Pakistan Fleet and Commander Logistics at Karachi on 12 May 19. Later, the burial rites of Abbas Khan Shaheed of SSG (Navy), were held and the Shaheed was laid to rest with full military honours. A contingent of Pakistan Navy presented guard of honour to Shaheed Abbas Khan and floral wreath was placed on his grave on behalf of Chief of the Naval Staff. Senior Officers from Naval Headquarters and Northern Command were also present at the occasion.

Chief of the Naval Staff, Admiral Zafar Mahmood Abbasi paid tribute to Shuhada and in his message to their families, he said that great sacrifices of Shuhada for national defence and counter terrorism in the country are highly praiseworthy.

Besides Pakistan Navy senior officials and men, personnel of sister services, relatives and a large number of people also attended the funeral and the burial rites.