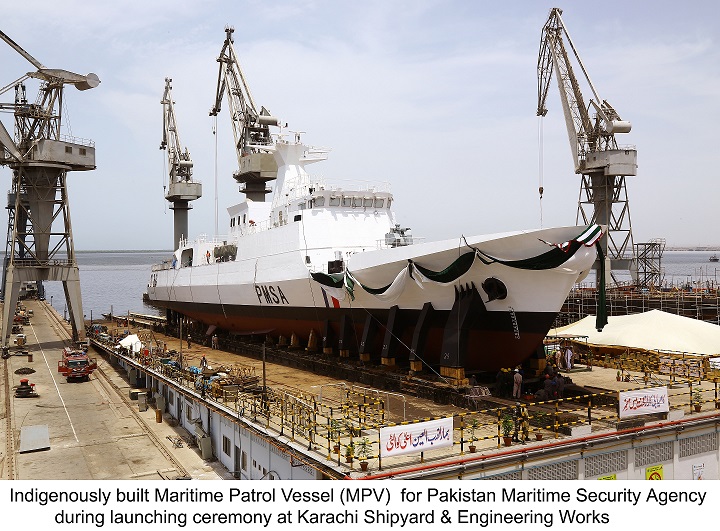 The Maritime Patrol vessel is a multi-mission vessel with steel hull and aluminum super structure having length of 95 m & breadth of 12.2 m and can achieve maximum speed upto 26 knots. The ship has been built in technical collaboration with China Shipbuilding & Trading Company (CSTC) and Huang Pu Shipyard, China. The ship is fully equipped to enforce maritime security, search and rescue missions in maritime exclusive economic zone of Pakistan.

Speaking on the occasion, the Chief Guest congratulated KS&EW, CSTC (China) and Huang Pu Shipyard, China on achieving this important milestone ahead of scheduled timeframe and said that it is yet another land mark project that speaks volumes of the evergreen friendship between China and Pakistan. He added that responsibilities of Pakistan Navy and PMSA have increased manifolds after CPEC and extension in EEZ.

Earlier, Managing Director KS&EW Rear Admiral Ather Saleem, in his welcome address said that this MPV will act as a force multiplier for PMSA in safeguarding maritime frontiers of Pakistan together with Pakistan Navy. He also apprised about ongoing mega projects at KS&EW including construction of 02 x MILGEM Class Corvettes and 04 x HANGOR Class submarines for Pakistan Navy and informed that preparations are in full swing to start the projects as per scheduled timeline. He further said that KS&EW is playing its role in national self-reliance & growth of national economy and has delivered 15 x different platforms in last five years.