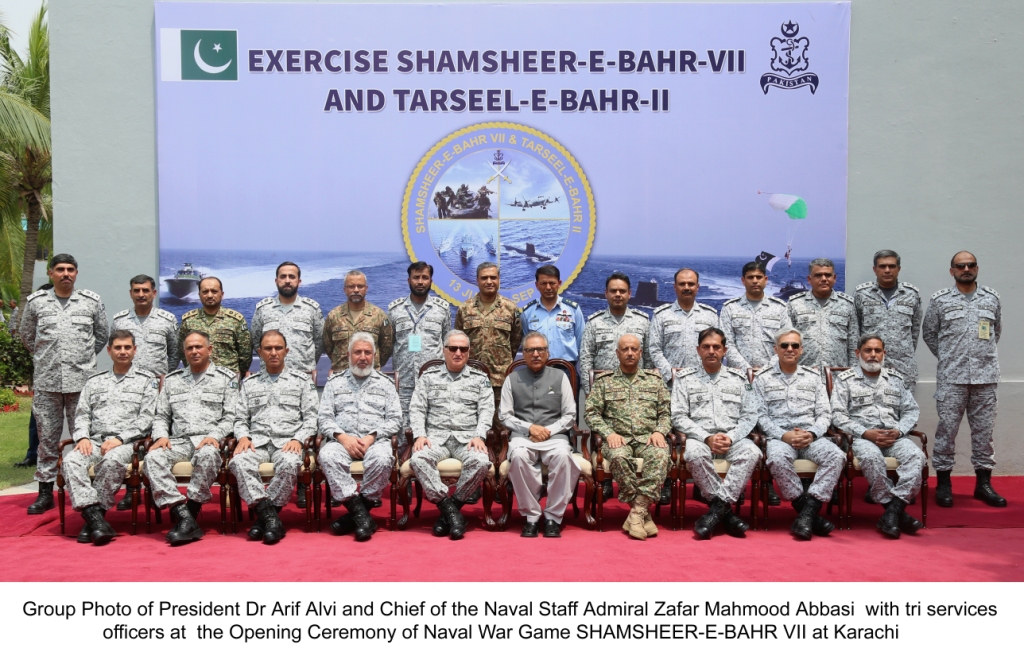 The opening session of Pakistan Navy war game SHAMSHEER-E-BAHR VII and logistic exercise TARSEEL-E-BAHAR II was held at Karachi. Honorable President of Pakistan, Dr Arif Alvi graced the occasion as Chief Guest.
Upon arrival, the Chief Guest was received by Chief of the Naval Staff, Admiral Zafar Mahmood Abbasi. Later, Deputy Chief of the Naval Staff (Operations), Rear Admiral Faisal Rasul Lodhi, presented an overview of the war game outlining objectives set forth and concepts to be tried. He highlighted that being a tri-service event with representation of relevant ministries SHAMSHEER-E-BAHR VII is the Flagship war game of Pakistan Navy that is held biennially to try various concepts which are then validated in subsequent Navy-wide field exercises before being incorporated into naval strategy.
Speaking on the occasion, the President said that Pakistan is facing multitude of internal and external challenges which necessitate a 'Whole of Nation Approach'. Chief Guest also underlined the significance of war games in military planning process and expressed his desire to see valuable lessons and recommendations at the end of War Game. The President appreciated the realistic stocktaking and thought provoking presentations by Force Commanders, which would help in crystallizing plans for maritime security and seaward defence of Pakistan. The Chief Guest particularly emphasized Pakistan's increasing relevance in the backdrop of CPEC and operationalization of Gwadar port. While underscoring the fact that economic well-being of Pakistan is linked with the freedom of navigation through seas, the Chief Guest said that prosperity of our people is intrinsically linked to the security of our Sea Lines of Communication which would add to the responsibilities of Pakistan Navy in ensuring unhindered flow of traffic in our waters.
Chief Guest highlighted that the illegitimate revocation of article 370 and 35-A from Indian constitution by BJP Government has engendered massive unrest in Indian Occupied Kashmir and raised serious concerns in Pakistan. Indian attempt to enforced fascist control over IOK has serious implications towards internal security situation in IOK and resultantly on the security in South Asia and the world at large. Pakistan will continue to fiercely contest and expose Indian atrocities in IOK politically and diplomatically at all possible levels till resolution of Kashmir issue in the light of UNSC resolutions.
The event was attended by large number of high ranking Armed Forces officers besides bureaucrats and reps of Federal Ministries.