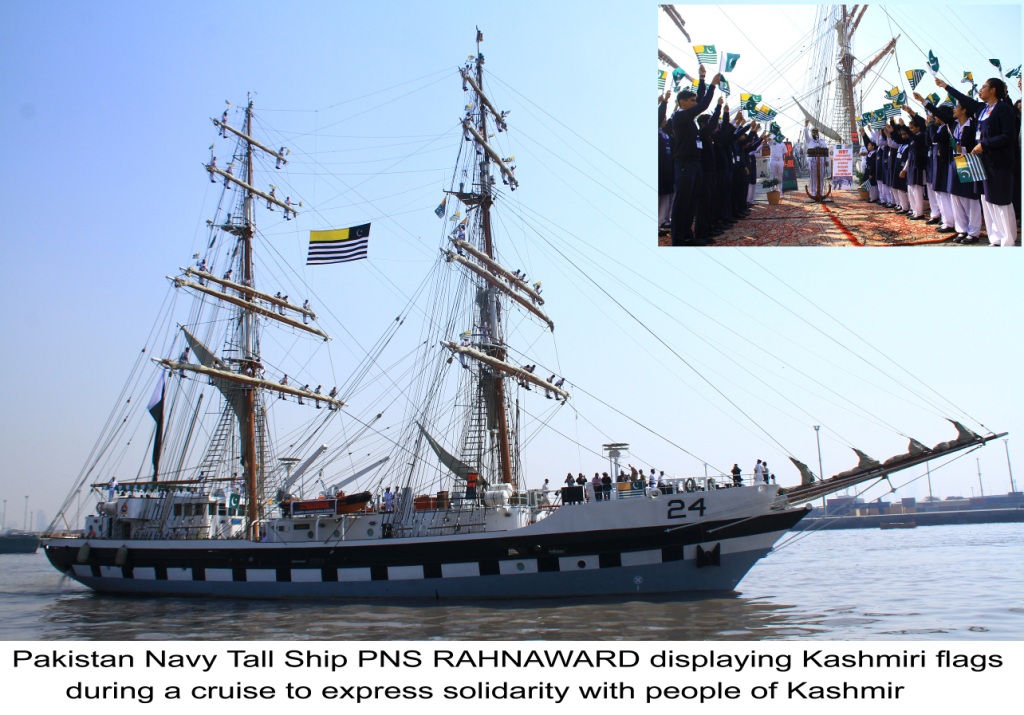 PNS RAHNAWARD, the only Tall ship of Pakistan Navy, decorated with Kashmiri flags and posters about Kashmir, conducted a cruise. The cruise was aimed at expressing solidarity with people of Kashmir and to exhibit support for their freedom struggle. Students from Bahria College Karachi while chanting national songs in sync with PN Band bid farewell to the ship. While transiting through sea, PN Fleet units in harbour conducted men and cheer ship to show solidarity and camaraderie with Kashimiri brothers.
Captain Shahid Rafique, Commander 21st Auxiliary Squadron briefed media personnel about PN efforts to highlight Kashmir issue at national and international level through naval diplomacy.
He informed the audience that Chief of the Naval staff Admiral Zafar Mehmood Abbasi has been highlighting Pakistan’s position on Kashmir issue at various occasions. During various occasions, the Naval Chief has reiterated that Pakistan will support Kashmiri’s struggle on moral, diplomatic and legal grounds and has emphasized that the world must support their right to self determination.
Captain Shahid explained that Navies around the world with their naval assets have played a pivotal role in exploiting the global diplomatic outreach of their respective nations. Pakistan Navy is also highlighting Kashmir issue through display of posters and banners on PN Ships during port calls. Moreover, brochures/ pamphlets are also being distributed. The purpose of these efforts is to highlight Indian atrocities in IOK and to support right of self determination for Kashmiris.
The event was a manifestation of the fact that Pakistan Navy firmly stands by the Kashmiri people in their just struggle to the very end to fulfill its obligations in this regard. Officers and Men of Pakistan Navy express complete solidarity with their Kashmiri brothers and Pakistan Navy will remain committed and ready to go to any extent for the liberation of Kashmiri brothers and sisters from the yoke of Indian illegal occupation in line with Government policies.